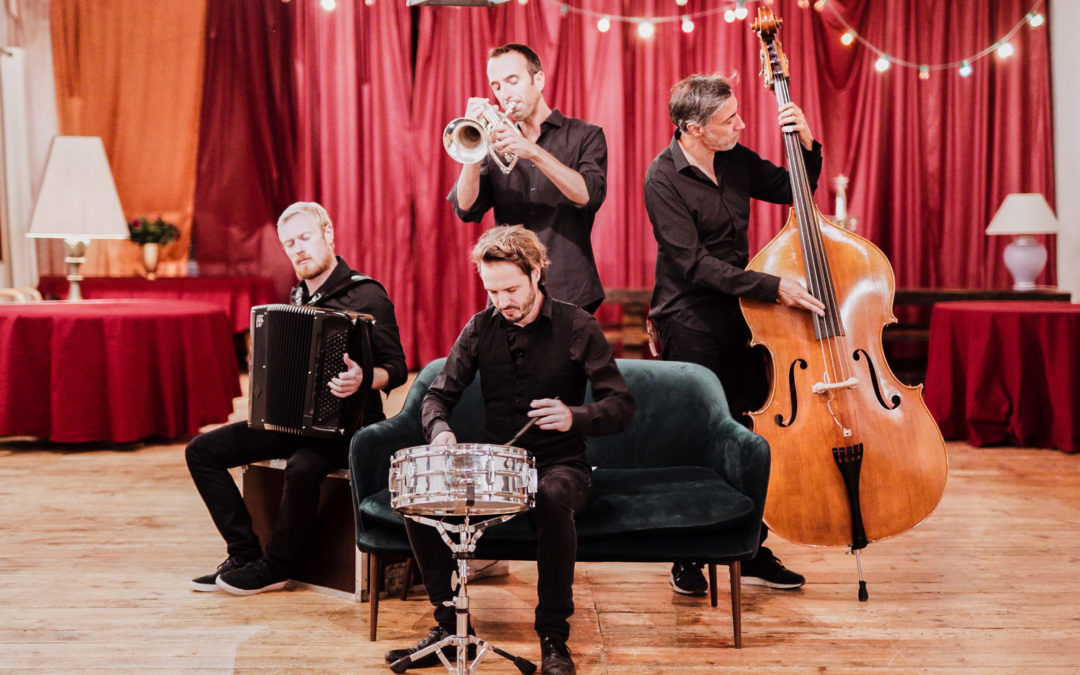 Originally from France’s great southwest, having grown up in a family of music lovers and musicians, Matthieu Chazarenc follows a course of study that is both classical and jazz oriented. Toulouse Conservatory, then CNSM Paris – class under the direction of Daniel Humair, from which he graduated with a 1st prize with congratulations in 2003, both in the field of jazz and improvised music.

Matthieu Chazarenc, refined drummer, devoted “sideman”  for the music of others, decided at the dawn of his forties to release his first album under his name: CANTO, the exact echo of his feelings at the moment.
He then chooses for this first trip, a brand new crew, an unprecedented group with Christophe Wallemme, grand master of fundamental elegance on the double bass, Sylvain Gontard, in fine stylist of the bugle and the young Laurent Derache on the accordion, who gives here in a free and lyrical way, a new breath of the “chill box”.

This choice of an instrumentation resolutely turned towards a sound privileging the acoustics, the chiseled note, the love of the melody and the song, in the listening, the improvisation, the smoothness of the dynamics, he proclaims it again. loud and clear in this CANTO II – Cançon recorded with the same team, thus reaffirming the durability of this group which has united through numerous concerts and tours. CANTO II will present twelve pieces, eleven original original compositions including a tribute to Marcel Azzola: Place Jasmin, and another to his native southwest to which he is very attached: Garona; piece where he invited a choir. Sylvain Luc, a guitarist who needs no introduction, is a guest on three tracks including the cover of “Plus bleu que tes yeux «  by Charles Aznavour, of which Matthieu Chazarenc was the last drummer.
Out the  26 march 2021: CCProduction/Cristal Records.

“So out of modesty and Cathar loyalty, I dedicate today’s celebration to others than myself: to my Gascon lineage, landscape and seafarer, which often did not even know how to write and in whose honor I write every mornings, in the country or paradise that I have lost, no doubt forever, and whose pathetic absence remains in me present, as in the heart of all its exiles, the lively Garonne, its light reading and its  musical language of those whom it irrigates and inspires ”.
Michel Serres
Let the CANTO II party begin!